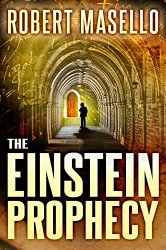 Set during World War II, The Einstein Prophecy by Robert Masello takes readers on an adventure of historical discovery and other-worldly dangers. Lieutenant and art professor Lucas Athan’s recruitment into the United States military leads him on a perilous mission to rescue important artifacts collected by the Nazi regime. When his next mission sends him into the depths of a huge hidden Nazi art collection, Lucas never expects the unease he feels as he sets his sights on the object of his mission: an ancient ossuary. Little did he know that the accident immediately following its discovery would only be the start of the strange and life-threatening occurrences surrounding the artifact. When that same ossuary is dropped in his lap a Princeton, the dark foreboding quickly returns and with good reason.

The genius Albert Einstein makes an appearance as Lucas’ neighbor and fellow professor at Princeton, staying at a distance from the main action of the novel except for in a few instances. The inclusion of Einstein is purposeful, utilizing his brilliance and role in the war as a parallel story to that of Lucas. Masello brings in other brilliant minds as his friends, often diving into scientific, theoretical, and even spiritual dialogue and contemplation that, though fascinating, applies indirectly to the plot of the story. As a whole, Einstein is a supporting character whose interactions and contemplations contrast with the reality facing the main character.

As someone who vastly enjoys WWII settings and anything to do with other-worldly or supernatural themes, I was thrilled to begin this book, especially with the inclusion of Einstein as a more unique approach. However, it didn’t take long for disappointment to set in. Perhaps I had too high of expectations, but by the end of the novel, I felt like I knew what was coming every step of the way. I guessed the climax at the start of the book. Every time something big happened, it failed to surprise or intrigue. Some of the dialogue felt forced and unnatural, and there were times that it seemed there was not enough explanation. How exactly did Simone wrangle her way into this secret mission? It just wasn’t convincing that her status in Egypt was enough to convince the U.S. government.  I also felt disappointed at the use of Einstein in the novel; his fulfillment of this “prophecy” was lackluster. While I understand the plot of the novel, too much was simply obvious or a far stretch to make a real impact. Overall, Lucas and his side-kicks were interesting, likable characters; however, he is overshadowed the idea of Einstein in the vicinity.

Although The Einstein Prophecy failed to impress, it was worth a quick read. If readers are expecting an intriguing WWII plot featuring Einstein as a major player, they will be disappointed. Einstein is a secondary character who serves a purpose that is nowhere near as fascinating as it could be. While Lucas is a character I rooted for from the very beginning, he simply didn’t have the plot to truly shine. His big save at the end was obvious and boring for a character with such rounded experience and knowledge. In the end, don’t expect a complicated, keeps-you-guessing plot, but try to enjoy the relationships between the characters and keep an open mind. There is an interesting combination of elements and ideas, and despite a less than surprising conclusion, one can appreciate the combination and conflict of scientific, political, and spiritual ideas that drive the plot forward and make the characters intriguing.

“The Einsten Prophecy” is currently available to Amazon Prime subscribers via July’s Kindle First selections and will be released to the general public on August 1, 2015 in audio CD, Kindle, and paperback editions.